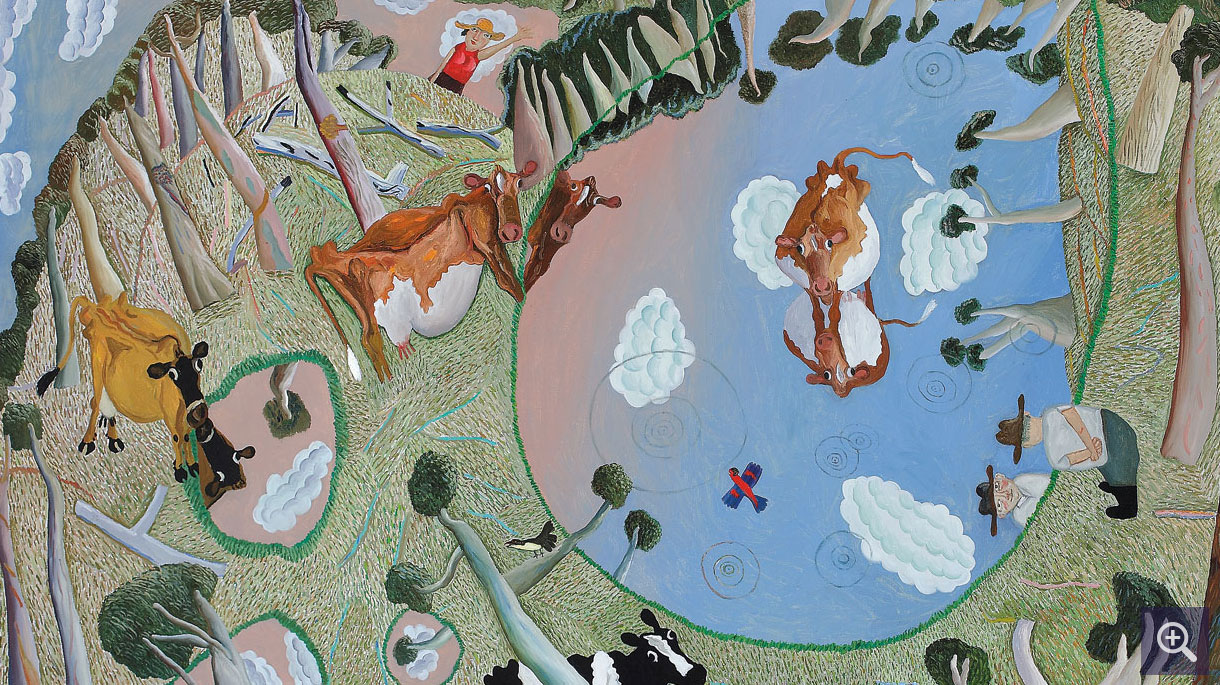 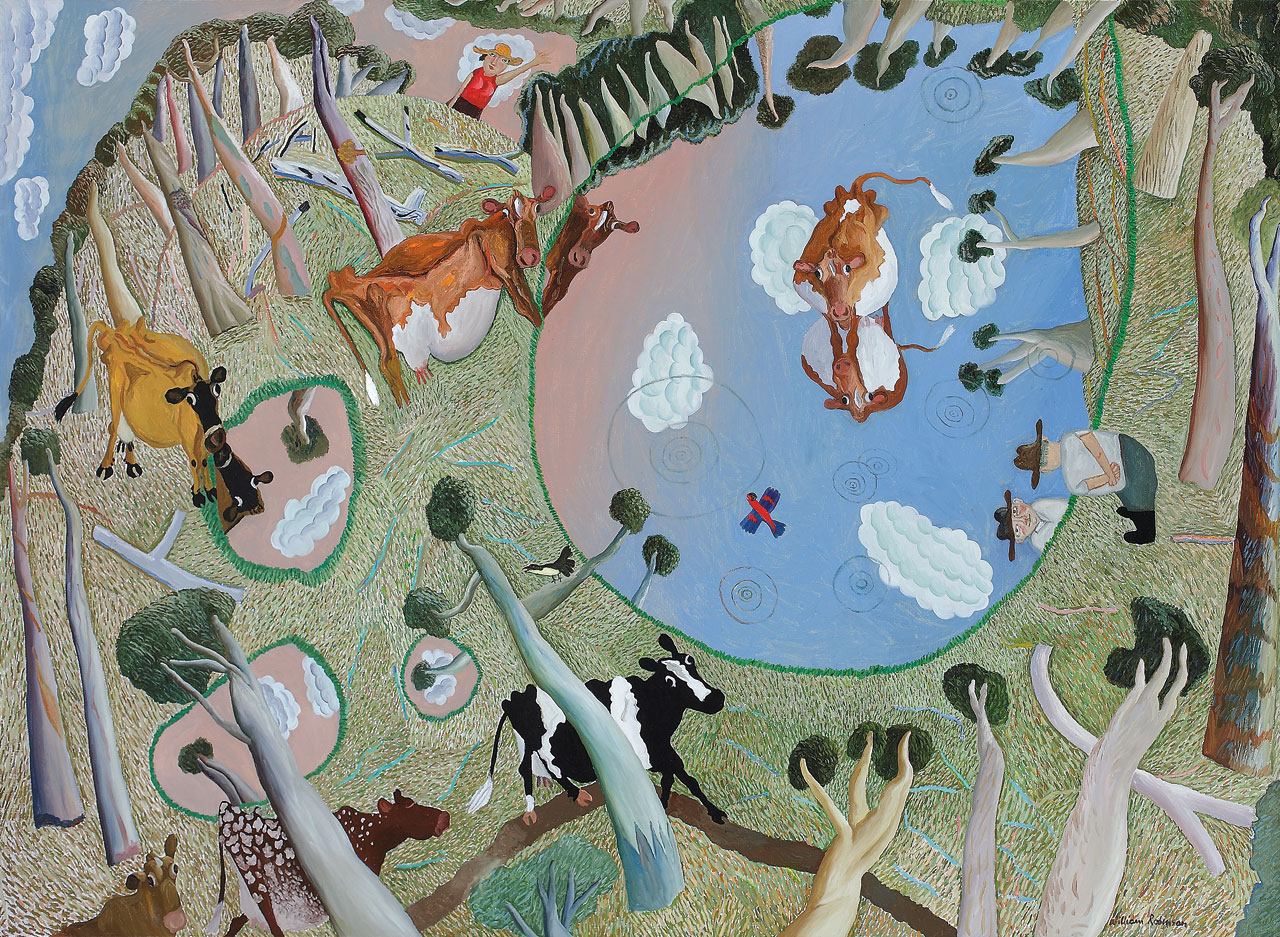 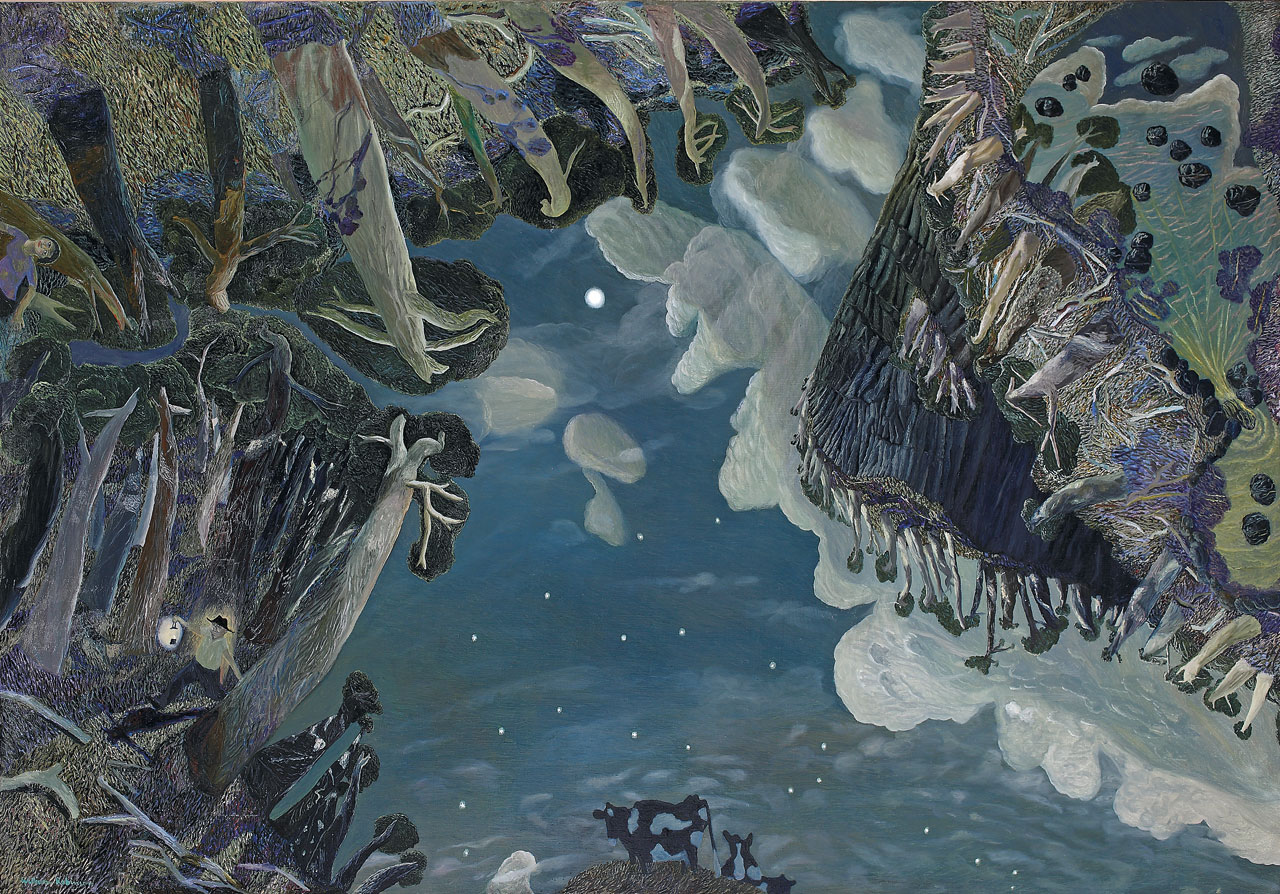 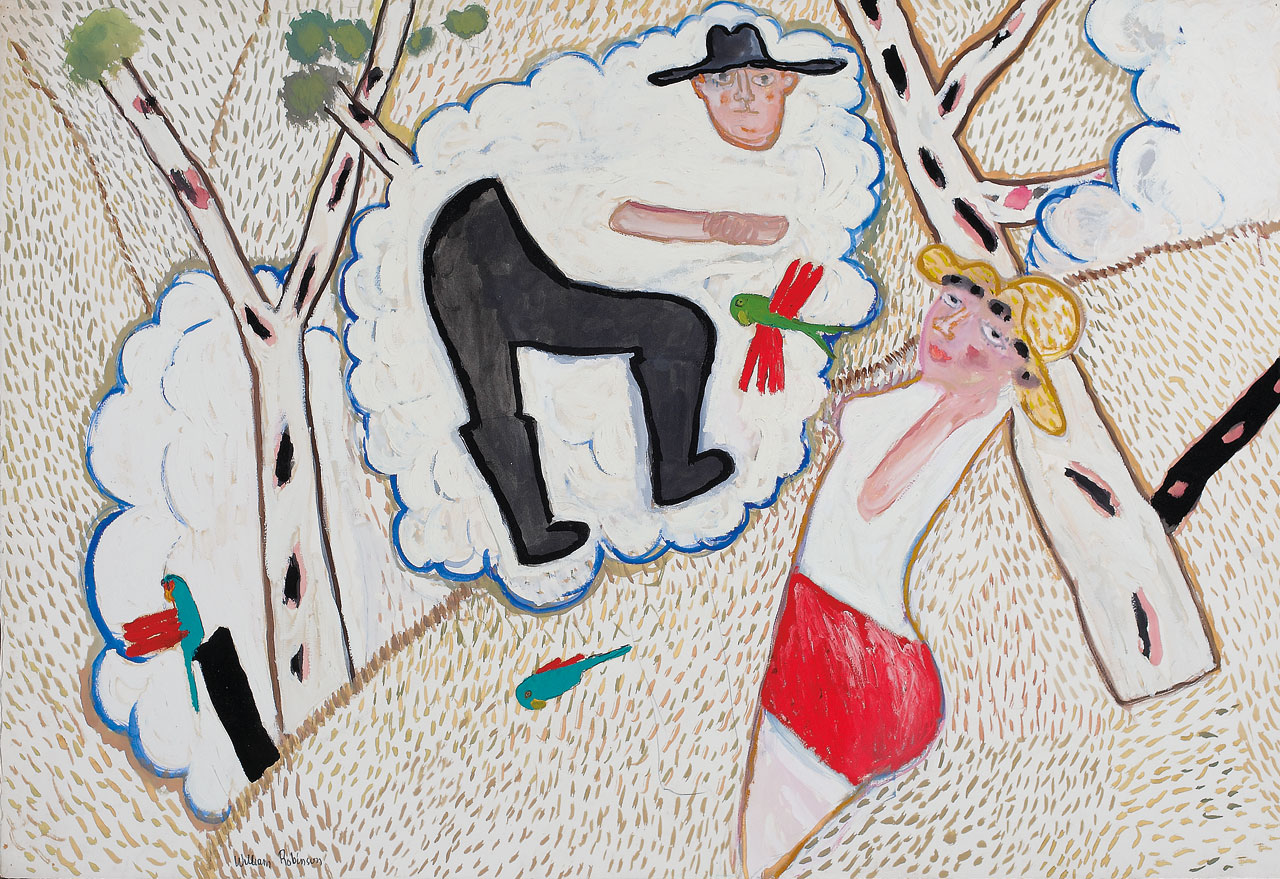 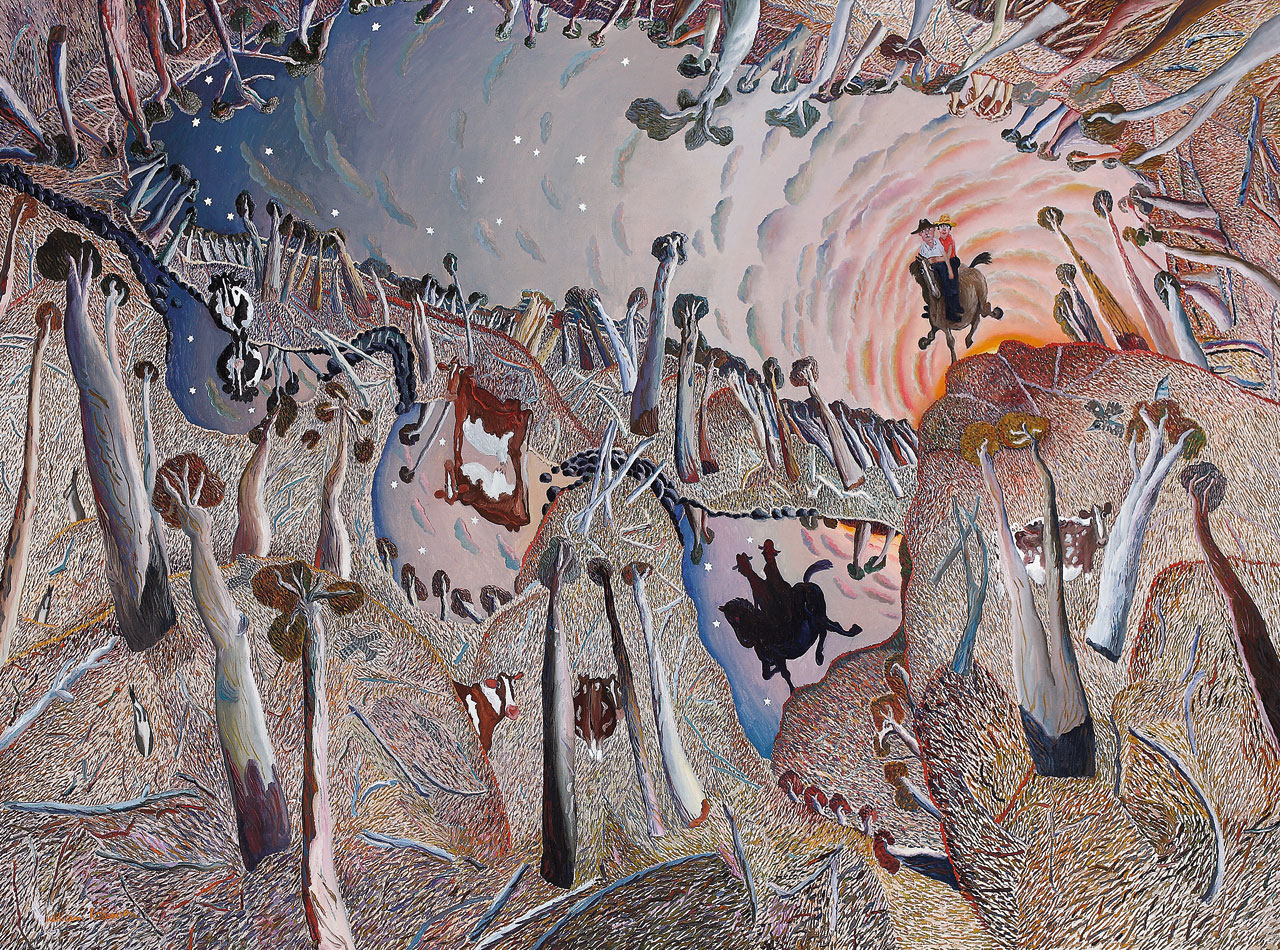 In 1984 William Robinson moved from the eastern outskirts of Brisbane to an eighty-hectare property near Beechmont in Queensland's Gold Coast hinterland. The relocation marked a critical turning point in Robinson's artistic development. His affinity with the spectacular hinterland landscape of verdant rainforest and dramatic mountains gave rise to a major new body of work that heralded a significant shift towards a more vigorous and individualistic style. It also signalled a breakthrough in the artist's career, ultimately establishing him as one of Australia's leading contemporary landscape painters.

Robinson lived at Beechmont until 1994, when he moved to nearby Kingscliff on the northern New South Wales coast. That same year he acquired a rainforest studio at Springbrook in the adjacent hinterland. The studio served as the creative base for the artist's landscape oeuvre over the next eleven years.

Hinterland: The rainforest works of William Robinson examines the landscapes produced by Robinson between 1984 and 2005, whilst living at Beechmont and, subsequently, whilst maintaining a studio at Springbrook. During this twenty-one-year period the artist painted some of his most original and compelling compositions, including the celebrated Creation and Mountain series.

In his rainforest works Robinson tempts the viewer to experience rather than observe the landscape. As he remarked:

I tried to describe the feeling of being in the landscape and walking around in it ... To look up and down almost at the same time; to have a feeling of time; the beginning and movement of the day and night, and be aware of the revolving planet ... revealed in the same work. I did not paint these works as a visitor to the landscape, but as one who lived in it and experienced it every day.

Robinson's multi-viewpoint, multi-time developments, in which the composition lacks any sense of conventional perspective, were evident in his work by the mid 1980s. These he achieved through his visual memory of the landscape based on his experience of walking through it. The artist went on to pursue these developments with energy and passion, creating works of immense structural complexity and intensity.

Robinson's rainforest works reveal the Australian landscape in a new light. He is perhaps the first Australian painter to focus fully on this subject and certainly the only one to adopt the multi-view experience, making the viewer an important part of the work. It is the mature vision of an artist devoted to mapping his feelings and recollections of the rainforest as a living entity of infinite diversity.

Hinterland: The rainforest works of William Robinson includes paintings, drawings, lithographs and ceramics, many of which have seldom before been shown publicly. It ranges in scope from Robinson's early puddle pictures, to images of the artist and his wife, Shirley Robinson, cavorting in their luxuriant Garden of Eden, to the sublime landscape devoid of figures.

The exhibition encapsulates Robinson's distinctive approach to portraying the physical and spiritual sense of being at one with the landscape. These works helped secure for the artist a unique place within Australia's distinguished landscape painting tradition. 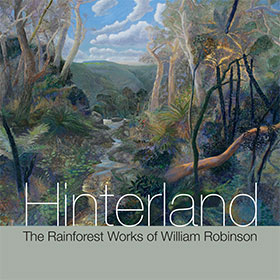 The Rainforest Works of William Robinson
Contributions by Stephen Rainbird